Because the massage for this post cancer surgery condition is usually best done daily, if possible, you may bring a partner with you to your appointment and Vicki will show this person, during a portion of your session time, how to help you with massages between your Release the Pain sessions.
Lymphatic massage by Release the Pain can provide relief, if you are suffering from Lymphedema, also known as lymphoedema and lymphatic edema, in Sacramento.  Between 38 and 89% of breast cancer patients suffer from lymphedema due to axillary lymph node dissection and lymphedema affects approximately 140 million people worldwide, as stated in Wikipedia, on the topic of "Lymphoedema".  The following is more information on this subject.

​"Lymphoedema is a condition of localized fluid retention and tissue swelling caused by a compromised lymphatic system, which normally returns interstitial fluid to the thoracic duct, then the bloodstream. The condition can be inherited or can be caused by a birth defect, though it is frequently caused by cancer treatments and by parasitic infections. .... Tissues with lymphedema are at high risk of infection." 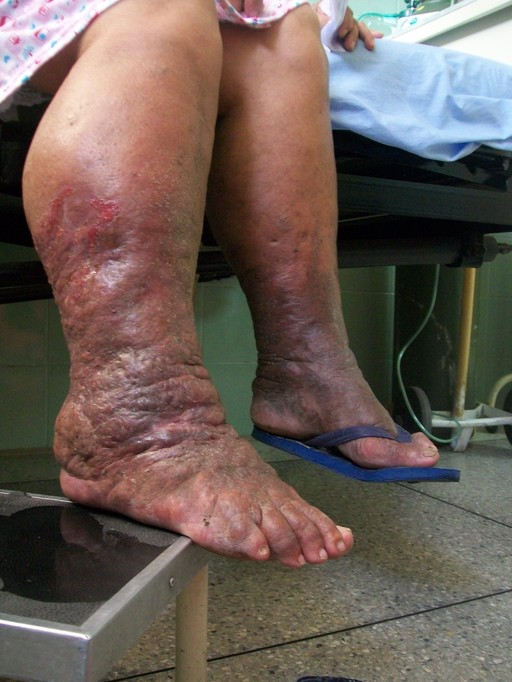 What Are the Signs & Symptoms of Lymphedema?

According to Wikipedia, "Symptoms will include swelling, edema, and pain from a multitude of secondary complications (pressure, musculoskeletal disorder from asymmetry, restricted blood flow)...... In advanced lymphedema, there may be the presence of skin changes such as discoloration, verrucous (wart-like) hyperplasia, hyperkeratosis, papillomatosis, and Ulcer (dermatology)."  "Lymphedema should not be confused with edema arising from venous insufficiency, which is not lymphedema. However, untreated venous insufficiency can progress into a combined venous/lymphatic disorder. Proper imaging will can identify where the dysfunction is in the system, and is essential in identifying the source before treatment is decided."

How Does Surgery Cause Lymphedema?

"Lymphedema may be inherited (primary) or caused by injury to the lymphatic vessels (secondary). It is most frequently seen after lymph node dissection, surgery and/or radiation therapy, in which damage to the lymphatic system is caused during the treatment of cancer, most notably breast cancer. In many patients with cancer, this condition does not develop until months or even years after therapy has concluded. It can also be caused by a compromising of the lymphatic system resulting from cellulitis.

Secondary lymphedema affects both men and women. In women, it is most prevalent in the upper limbs after breast cancer surgery, in particular after axillary lymph node dissection, occurring in the arm on the side of the body in which the surgery is performed. Breast and trunk lymphedema can also occur but, go unrecognised as there is swelling in the area after surgery and its symptoms ( peau d' orange and/or an inverted nipple ) can be confused with post surgery fat necrosis. In Western countries, secondary lymphedema is most commonly due to cancer treatment. Between 38 and 89% of breast cancer patients suffer from lymphedema due to axillary lymph node dissection and/or radiation. Unilateral lymphedema occurs in up to 41% of patients after gynecologic cancer. For men, a 5-66% incidence of lymphedema has been reported in patients treated with incidence depending on whether staging or radical removal of lymph glands was done in addition to radiotherapy.

Head and neck lymphedema can be caused by surgery or radiation therapy for tongue or throat cancer. It may also occur in the lower limbs or groin after surgery for colon, ovarian or uterine cancer, in which removal of lymph nodes or radiation therapy is required. Surgery or treatment for prostate, colon and testicular cancers may result in secondary lymphedema, particularly when lymph nodes have been removed or damaged."

How Does the Lymphatic System Work?

"​Lymph is formed from the fluid that filters out of the blood circulation to nourish cells. This fluid returns through venous capillaries to the blood circulation through the force of osmosis in the venous blood; however, a portion of the fluid that contains proteins, cellular debris, bacteria, etc. must return through the lymphatic collection system to maintain tissue fluid balance. The collection of this prelymph fluid is carried out by the initial lymph collectors that are blind-ended epithelial-lined vessels with fenestrated openings that allow fluids and particles as large as cells to enter. Once inside the lumen of the lymphatic vessels, the fluid is guided along increasingly larger vessels, first with rudimentary valves to prevent backflow, which later develop into complete valves similar to the venous valve. Once the lymph enters the fully valved lymphatic vessels, it is pumped by a rhythmic peristaltic-like action by smooth muscle cells within the lymphatic vessel walls. This peristaltic action is the primary driving force, moving lymph within its vessel walls. The regulation of the frequency and power of contraction is regulated by the sympathetic nervous system. Lymph movement can be influenced by the pressure of nearby muscle contraction, arterial pulse pressure and the vacuum created in the chest cavity during respiration, but these passive forces contribute only a minor percentage of lymph transport. The fluids collected are pumped into continually larger vessels and through lymph nodes, which remove debris and police the fluid for dangerous microbes. The lymph ends its journey in the thoracic duct or right lymphatic duct, which drain into the blood circulation."

How to Diagnois Lymphedema?

"Assessment of the lower extremities begins with a visual inspection. Color, presence of hair, visible veins, size and any sores or ulcerations are noted. Lack of hair may indicate an arterial circulation problem.  Given swelling, the calf circumference is measured for reference as time continues. Elevating the legs may reduce or eliminate the swelling. Palpation of the ankle can determine the degree of swelling. Assessment includes a check of the popliteal, femoral, posterior tibial and dorsalis pedis pulses. The inguinal nodes may be enlarged. Enlargement of the nodes lasting more than three weeks may indicate infection or some other disease process requiring further medical attention.

Diagnosis or early detection of lymphedema is difficult. The first signs may be subjective observations such as "my arm feels heavy" or "I have difficulty these days getting rings on and off my fingers". These may be symptomatic of early stage of lymphedema where accumulation of lymph is mild and not detectable by changes in volume or circumference. As lymphedema develops further, definitive diagnosis is commonly based upon an objective measurement of differences between the affected or at-risk limb at the opposite unaffected limb, e.g. in volume or circumference. No generally accepted criterion is definitively diagnostic, although a volume difference of 200 ml between limbs or a 4-cm difference (at a single measurement site or set intervals along the limb) is often used. Bioimpedance measurement (which measures the amount of fluid in a limb) offers greater sensitivity than existing methods.

Chronic venous stasis changes can mimic early lymphedema, but the changes in venous stasis are more often bilateral and symmetric. Lipedema can also mimic lymphedema, however lipedema characteristically spares the feet beginning abruptly at the medial malleoli (ankle level). Lipedema is common in overweight women. As a part of the initial work-up before diagnosing lymphedema, it may be necessary to exclude other potential causes of lower extremity swelling such as renal failure, hypoalbuminemia, congestive heart-failure, protein-losing nephropathy, pulmonary hypertension, obesity, pregnancy and drug-induced edema."
You can find more information on lymphedema in Wikipedia and this video